There are more people getting together as groups not only for impromptu short excursions but also for organized rides. A group ride could be defined as any group of two or more motorcycles riding together. There are many specifics concerning group riding, including, instructions before the ride so everyone understands the hand signals, the route, how long between rest stops and a myriad of other necessary instructions. This article is not going to go into specifics, but rather into the general guidelines of group riding so as to have a safe ride; but not be so overwhelmed with things to remember as to take away from the enjoyment of the ride. 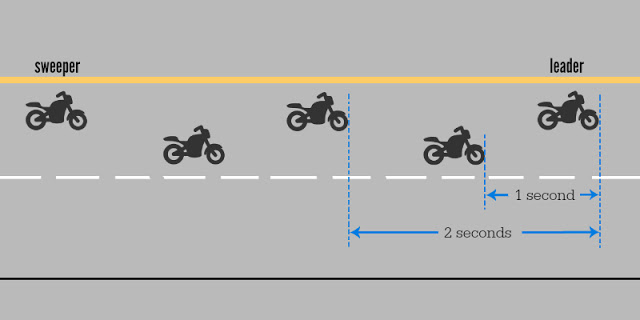 A Group Ride is normally composed of a Ride Leader and a Sweep, Tail, or Drag Rider (bringing up the rear). For organized rides they usually have knowledge of the route including not only the final destination, but also the stops along the route.

Normal riding as a group is done in a staggered formation. This is, basically, dividing a lane in half with each rider occupying his/her own half of the lane. It is each rider’s responsibility to ride in the half of the lane as dictated to by the next rider in front. If the rider in front needs to change lane halves to maintain the stagger, then it is the following rider’s responsibility to change lane position on down the line to accommodate this change.

The Lead Rider usually starts the stagger in the left half of the lane position. While in staggered group riding, the normal stagger distance is 1 -2 seconds, and no more than a 3 second gap, in order to maintain a tight formation and not allow traffic to interrupt and break up the formation. This means that each rider will be 2 -3 seconds behind the rider directly in front and using the same half of the lane. If you can see the riders face in the mirror in front of you they should be able to see you. When coming to a stop, the group generally forms up two abreast / side by side. When the group starts off, the rider on the left starts first. When riding through sharp curves, the stagger may no longer be utilized and a single file type of formation is used. These changes in lane position should be dictated by the Lead Rider. The index finger pointing straight up in the air is a direction for single file riding. Holding two fingers straight up in the air (the index and little fingers) indicates a staggered formation. Single file riding allows the riders more freedom to negotiate the curves and to dodge obstacles while having the freedom to use the whole lane. In single formation the normal distance between riders is increased to 3 – 5 seconds. For safety, the single file formation should not be elongated to such a distance that the rider in front cannot be seen.

There are two reasons for this:

1. It is much easier to negotiate around corners by using the next rider’s position to “see” further around blind curves

2. The rider can see and pass back hand signals indicating obstacles or other information ahead.

The Lead Rider is responsible for setting a safe and reasonable speed for all riders. Consideration should always be given for slower motorcycles and posted speed limits. If any rider feels that the group pace is too fast for comfort, then he/she should motion the following bikes to pass until the only one left following is the Sweep Rider. Then ride at your own pace until the next stop. Then you should inform the Lead Rider that you are uncomfortable with the pace. It will then be up to the Lead Rider to either separate the ride into two groups, or go at a slower pace so that all members of the group feel secure. Group riding should not be, and is never, a race!

When turning onto another road, if the next rider back cannot be seen, either due to having traffic in-between, or a large enough gap in the group for any reason; the last rider in the line must wait at the turn for the next rider to show up before leaving the turn so as to signal that the route has taken a turn. This will keep the group together on the same route even though there may be unforeseen gaps in the formation.

Passage of Information Through Signals:

During the ride, the Lead Rider will make various blinker light, hand, and leg signals. These signals indicate lane changes or turns, obstacles, increasing/decreasing speed, or whether to form a stagger formation or a single line. In large groups these hand signals need to be passed back through the group from the front rider to the next rider in line. That way each rider only needs to be cognizant of signals from the rider directly in front of him/her rather than everyone trying to keep an eye on the Ride Leader.

Blinker lights should always be used to not only allow everyone to see the upcoming change, but to feed back acknowledgment. In a group ride, whether it be the Lead Rider or in the middle of the pack, the bike in front needs to see the blinker light of the following rider before turning in front of the following rider/bike (such as a right hand turn when the bike in the left stagger crosses over in the right stagger lane). This prevents the bike in front from crashing into the (surprised/unprepared) following bike/rider when making the turn. Assuming that the following bike sees your blinker light. Sometimes riders don’t notice blinker lights right away, so they should be turned on well before the turn. That way everybody in the group becomes aware that a turn is coming up. Appropriate hand signals are recommended in conjunction with blinker signals.

If an obstacle is spotted in the road, it should immediately be signaled to the riders in back for safety. Sometimes, when the obstacle is spotted in a blind curve, and one doesn’t want to take one’s hand off the handlebars, the signal is often done with an outstretched leg (indicating which side of the lane the obstacle is located). This can be very useful when you don’t want to take your hand off the throttle and the obstacle is on the right side of a blind curve. Some typical obstacles which should be signaled as to where they may lie in the lane are: sand/dirt/gravel/rocks, pot holes, dead animals, road dragons, (pieces of truck tire treads), vehicular debris, range cattle, tar snakes (road tar repairs), furniture, etc. These obstacle signals should always be passed to the rear as soon as possible so as to give those riders the best opportunity to dodge them. Don’t forget that the riders towards the rear in a group ride will not be able to see as much of the whole road surface as those in front due to the visual blockage of the front riders. Other hand signals include speed changes, directions for coming alongside or passing, need for food or rest stop, and other miscellaneous things like telling another rider that his blinker light is on unnecessarily. 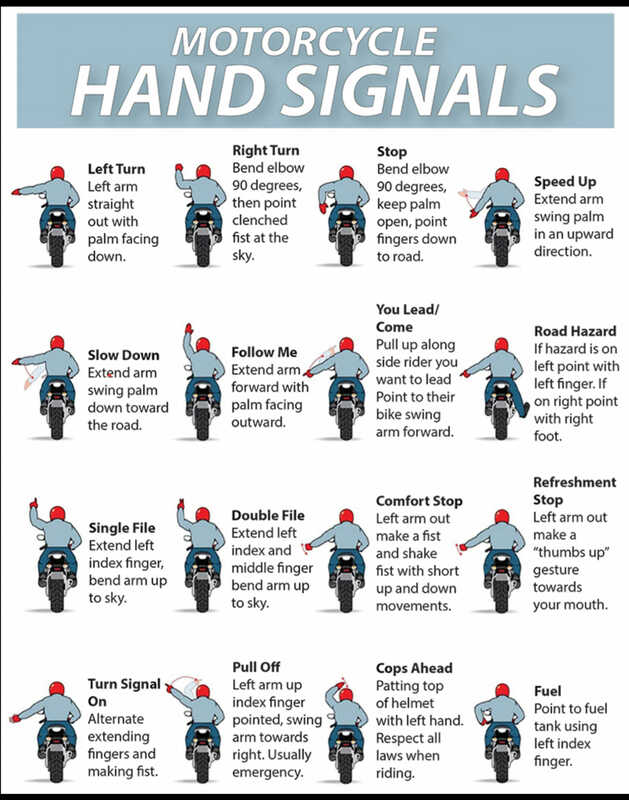